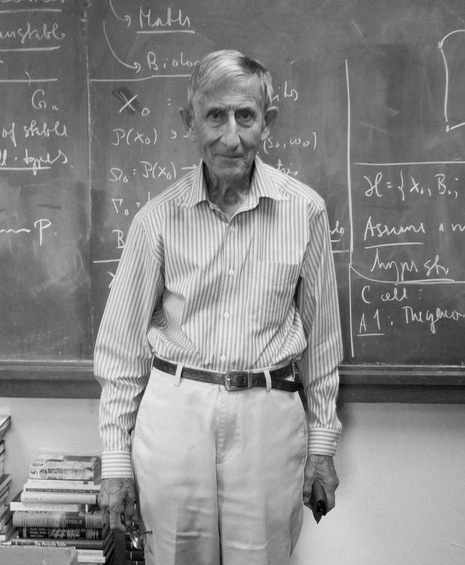 Freeman Dyson (1923 – 2020) was a Professor Emeritus of Mathematical Physics and Astrophysics in the School of Natural Sciences at the Institute for Advanced Study in Princeton, New Jersey, an institution with which he first became associated as a Visiting Member in 1948 and where he became a Professor of Physics in 1953. He was also formerly a Fellow of Trinity College, Cambridge, a Research Fellow at the University of Birmingham, a Professor of Physics at Cornell University, and a Visiting Professor at the Max Planck Institute for Physics in Munich. He in addition served as the Chairman of the Federation of American Scientists.

Professor Dyson (whose father was the composer Sir George Dyson) was born and educated in England, where from 1943 to 1945 he carried out operations research at the Bomber Command Headquarters of the Royal Air Force. Since moving in 1947 to the United States, of which he subsequently became a citizen, he at times acted as a consultant to the Department of Defense of the United States and to various other laboratories and agencies of the U.S. Government. He also served on the Commission on Life Sciences of the National Research Council and on the Advisory Council of the National Aeronautics and Space Administration. In the late 1950s he assisted the General Atomic Division of General Dynamics Corporation by helping to design the TRIGA reactor and the Project Orion spaceship.

He was awarded many prizes and more than twenty honorary doctorates for his work as a mathematician, physicist, and writer. His reputation as a mathematician and physicist of the first rank was established in 1949 by his unification and mathematical exposition of the quantum electrodynamics of Feynman, Schwinger, and Tomonaga, and after that his work ranged over a broad range of fields, especially those presenting opportunities for the application of elegant mathematics. At the same time he wrote extensively for the general public. His writings, which exhibit the independence of mind that he sees as essential to the scientific and indeed human enterprise, are often marked by provocative observations and speculations relating to such matters as the ‘divorce’ between mathematics and physics, the limitations of computer-generated models, and the complex relation of the activity of self-consciousness to matter and its motion.

Among his books are Disturbing the Universe (an autobiographical articulation of the scientific worldview), Birds and Frogs (a selection of his more recent papers), and Infinite in All Directions (which is based on his Gifford Lectures on Natural Theology delivered at the University of Aberdeen in 1985). He also wrote not only many scientific papers but also many popular articles and reviews for such publications as Scientific American, The New Yorker, and The New York Review of Books. He was in addition a Member of the National Academy of Sciences, an Associé Étranger of the Académie des Sciences of the Institut de France, a Corresponding Member of the Bavarian Academy of Sciences, a Foreign Member of the Russian Academy of Sciences, an Honorary Fellow of Trinity College, Cambridge, and a Fellow of the Royal Society. In 2000 he was awarded the Templeton Prize for Progress in Religion.

On the Freedom of Thought and Nature: Freeman Dyson and Stephen Blackwoo‪d‬